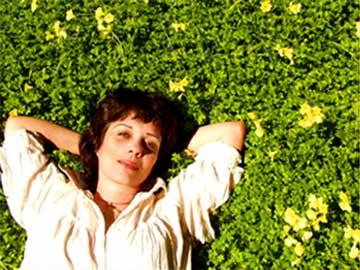 Maria takes her musical cues from the myriad native and international styles- bolero to jazz, Celia Cruz to Edith Piaf- of the Caribbean capital Caracas. Her professional career began during her late teens when she formed a duo with Venezuelan composer and Latin-rock-jazz fusionist Vytas Brenner, and the pair rose to rapid national acclaim before Maria left for the U.S. during her early 20's to study voice, composition, arranging and film scoring at Boston's Berklee College of Music.

After graduation, Maria trekked cross-country to train with world-renowned vocal coach Judy Davis in Oakland. Maria performed in a duo with jazz guitarist Joyce Cooling, the duo expanded with the participation of percussionist John Santos and keyboard player Jay Wagner, and the rest is, as they say, history. Maria would become an important figure in the Latin Jazz scene in the Bay Area for the next two decades.

In the mid 80's, Maria's recordings with Synclavier virtuoso Frank Harris, including the score to Venezuelan director Calogero Salvo's 1986 film "Three by three" garnered comparisons to the work of Brazilian songstress Astrud Gilberto. One of their arrangements for a traditional work song called "Canto de Pilon" was recorded by bassist Charlie Haden for his Grammy Award winner CD "Dream Keeper".

Maria returned to Caracas during the early 90's, and as musical programmer for jazz 95.5 FM, she assimilated the burgeoning international "world music" scene into the popular taste. In 1995, she recorded and co-produced her first solo album "De uno y otro lado" before returning to California and participating for the next 5 years in Latin/Middle Eastern fusion group Wild Mango.

The latest effort by Maria "Nature's Princess" (Princesa de la Naturaleza) has taken her 2 years to complete. Another self-produced record, an ambitious project which includes 30 musicians in a variety of settings, from the intimate sounds of a string quartet to large ensembles supported by a whole bateria of percussion all performed by friend and mentor John Santos.

See Maria's lovely website, complete with samples of her music at http://mariamarquez.com/

When not performing or composing for Trio Paradiso (previously heard at Chez Hanny), accordionist Rich Kuhns squeezes out a living in various other musical contexts. He recently returned from a European tour with Harry Belafonte. A member of the Latin jazz ensemble Soul Sauce, he also performs and records with Brazilian vocalist Claudia Villela. His accordion can be heard on a number of feature filmscores, the most recent being a Merchant/Ivory film The Mystic Masseur. In October 2002 he composed and performed an original score on solo accordion to accompany the silent film Nosferatu at the Fine Arts Cinema in Berkeley.

Bassist Dan Feiszli attended the University of Miami School of Music on a scholarship. There he studied with internationally renowned bass professor Dr. Lucas Drew. In 1998, Dan received his Bachelors Degree in Studio Music and Jazz, as well as the School of Music Student of the Year Award. During his time in Florida he played with Ira Sullivan, Richie Cole, and Sonny Fortune, among others.

Since his graduation, he has traveled the Western hemisphere performing with artists like Ignacio Berroa, Raul DiBlasio, Julio Iglesias, Silvano Monasterios, Raul Midon, and Nicole Yarling. In the US, Dan has performed at such music festivals as The Playboy Jazz Festival in Hollywood, California, the Mary Lou Williams Women in Jazz Festival in Washington, DC (with Nicole Yarling), and several appearance at the Hollywood Jazz Festival in Hollywood, Florida. His national club performances range from the Blue Note in New York City to the Jazz Bakery in Los Angeles.

Since moving to the Bay Area, he has been heard in top flight company such as Bobbe Norris, Larry Dunlap, Akira Tana, Larry De La Cruz and Michael O'Neill.

Tom Miller's vast experience as a performer, composer, arranger and educator of steel drum music has made him one of the most sought after soloists and clinicians in the art form. Tom has performed worldwide with his own popular steel drum group Pan Ramajay, as well as notable pan masters, Andy Narell, Ray Holman, the Our Boys Steel Orchestra, renowned Calypsonian David Rudder, bass sensation, Michael Manring, woodwind virtuoso Paul McCandless, Germany's famed WDR Jazz Ensemble, the San Francisco Contemporary Chamber Orchestra, and as a member of the Windham Hill recording ensemble, Montreux.

Tom's playing has been featured on film scores for the movies, Commando, Nina Takes a Lover, and The Mystic Masseur. He has also recorded with artists such as Grammy award winner Allison Krause, Charlie Musselwhite, John Denver, Allison Brown, Jenna Mammina and Maria Marquez. Tom's composing talents have earned him grants from the prestigious Meet the Composer Foundation five times. He currently serves on the faculty of the Jazz School, in Berkeley, CA as well as Chabot College in Hayward, CA.