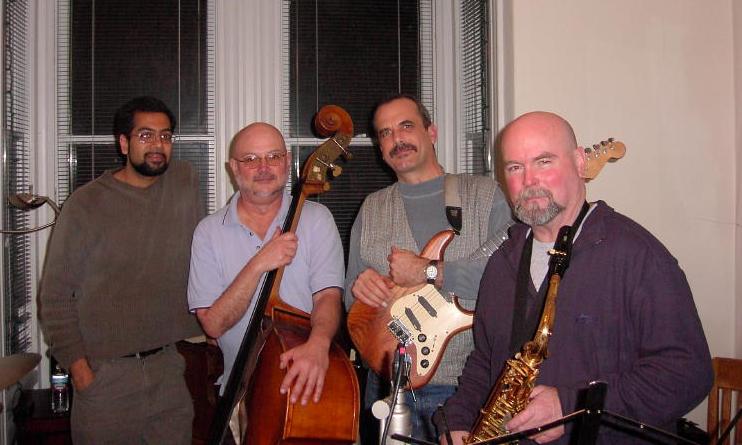 LEFT TURN NO SIGNAL…A group dedicated to the idea that music rooted in the "Tradition," and played by technically proficient musicians, can also be new, creative, and full of surprises at every "turn". So…get set for a real treat. LEFT TURN NO SIGNAL plays hard-driving Jazz ranging from creative, unusual interpretations of standards, to original compositions and free improvisation. Their music is intense, humorous, unusual, and simply beautiful.

is a highly respected Jazz innovator in the Bay Area. Mel moved to New York in the late seventies, and quickly became an esteemed member of the new music scene where he was the featured tenor soloist with the Jaki Byard Big Band. Mel has played and recorded with such diverse musicians as Ray Anderson, Barry Altschul, John Scofield, Hal Galper, Bill Frisell, Ted Curson, Mike Formanek, Saheb Sarbib, and Paul Motian.

Jeff Buenz (guitar) is one of the most interesting and adventuresome guitar soloists in the Bay Area. Jeff is also noted for his ensemble playing, with an array intriguing textures, shadings, and colors at his finger tips. Jeff is a mainstay of local favorite Viva Brazil, and was featured guitarist with Airto and Flora Purim on their European tour. He has also played with Toninho Horta, as well as Stanley Turrentine and many others.

Rich Girard (bass)  is an incredibly resourceful and creative bassist, Rich is the most sought after bassist in the Bay Area for both recording and performing. Rich has played and recorded with such diverse artists as Andy Narrell, Mel Torme, Stuart Copeland, David Byrne, and Mose Allison. He also travels extensively with the John Dankworth/Cleo Laine Band playing concerts in the U.S., and around the world. Rich was recently heard at Chez Hanny with Trio Paradiso.

Sameer Gupta (drums, percussion)  is fast becoming a Bay Area phenomenon. Sameer’s influences range from Elvin Jones to Tony Williams, and Ustad Allah Rakha. In addition to being the percussionist for The Supplicants he has had the pleasure of working with many great musicians, including Prince Lasha, Marc Cary, Marcus Shelby, Roy Hargrove, and Smith Dobson. Sameer was heard here previously with the Mitch Marcus Quintet.