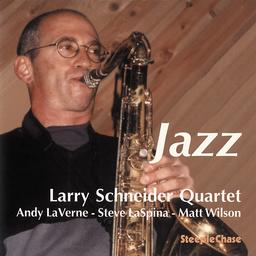 Saxophonist Larry Schneider has worked with some very heavy hitters in jazz. Possibly best known for playing with Horace Silver in the '70s, Schneider has performed with many others, including  Billy Cobham, Pete Escovedo, Ray Obiedo, the George Grunz International Big Band, and the Thad Jones-Mel Lewis Jazz Orchestra.

It would not be an exaggeration to say that, since the death of Joe Henderson, Larry may be the Bay Area's most distinguished international exponent of the tenor saxophone: He made two records with Bill Evans and cites Evans as one of his main influences, together with John Coltrane. More recently, he has been leader or sideman on more than a dozen recordings for  SteepleChase, one of Europe's hippest jazz labels, recording with the likes of pianists Andy LaVerne, Richie Beirach and Jim McNeely, guitarist Dave Stryker, bassists Mike Richmond and Steve La Spina, and drummers Billy Hart, Keith Copeland, Adam Nussbaum and Anton Fig. He has toured for the last ten years in Europe as a guest soloist, and performed at both the Montreux and Antibes jazz festivals.