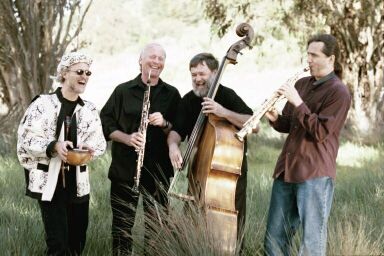 Ian Dogole, percussion. Ian has engaged audiences throughout the United States with his highly energized percussion skills, musical sensitivity and limitless enthusiasm. Whether performing his original compositions, traditional indigenous music from Africa, Asia or South America, or compositions by Thelonious Monk, Ralph Towner or Bela Bartok, Dogole freely draws from a broad spectrum of musical styles and atmospheres to achieve a profound connection with his listeners.

Paul McCandless, woodwinds. During a distinguished career spanning three decades, Paul McCandless has brought a soaring lyricism to his playing and composing that has been integral to the ensemble sound of two seminal world music bands, the original Paul Winter Consort and the relentlessly innovative quartet, OREGON. A gifted multi-instrumentalist and composer, McCandless has specialized in an unusually broad palette of both single and double reed instruments that reflect his grounding in both classical and jazz disciplines.

Bill Douglass, double bass, Chinese bamboo flutes, ocarina. Bill has been playing on the jazz scene in the San Francisco Bay Area since 1965. He is on the faculty of The Jazzschool in Berkeley. He has been recording and performing with pianist Marian McPartland for more than 15 years, and has also been playing with singer Paula West for many years as well. Over the years he has has the great pleasure to perform with Bobby McFerrin, Mose Allison, Jon Hendricks, Mark Isham,  Tom Waits, Terry Riley, Art Lande's Rubisa Patrol and many more. His flute work can be heard on such films as The Black Stallion, Never Cry Wolf, and 1000 Pieces of Gold.

Composer and woodwind multi-instrumentalist Sheldon Brown formed the Sheldon Brown Group in 1993, and in 1996 he released the jazz/fusion CD Shifting Currents. Brown tours internationally (most recently with pianist Omar Sosa) to world-renowned venues such as the North Sea Jazz Festival, Moers Jazz Festival, Vancouver Jazz Festival, Jazz d'Or, Toronto Jazz Festival and the Spoleto Festival. He is featured on Omar Sosa's CDs Prietos, Bembon, Spirit of the Roots and Free Roots and on Ian Dogole's CDs Ionospheres and Night Harvest. Brown is a member of San Francisco's Club Foot Orchestra, for whom he has composed scores for Film Roman's cartoon series The Twisted Tales of Felix the Cat and silent films such as Fritz Lang's Metropolis, Buster Keaton's Sherlock Jr. and Cops, G. W. Pabst's Pandora's Box and Robert Wiene's Hands of Orlac. Club Foot has performed at New York's Knitting Factory, Walter Reade Theater, at Lincoln Center and the Smithsonian Institution, in Washington, D.C. Brown performed in Anthony Braxton's Composition No. 132 at Grace Cathedral as part of the 1986 San Francisco Jazz Festival. He currently teaches composition at the Jazzschool in Berkeley, California.