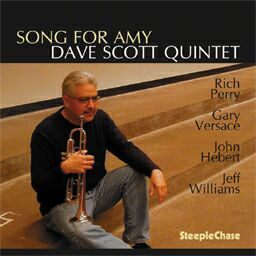 The Dave Scott Quintet features several of New York's finest improvisors. Although the harmonies and forms of Dave's compositions are very specific, the music has an open quality which allows each piece to develop interactively and organically and allows each musician to express his own individuality. The group performs regularly in the New York City area including the Knitting Factory and the Cornelia St. Cafe and has been featured on the Los Angeles County Museum of Art concert series and at Jazz City on the campus of the University of Southern California. Other venues include the Deer Head Inn, the Blue Room in Kansas City, MO, Southern Illinois University, Northern Illinois University and St. Charles Community College.

Rich Perry is a widely experienced tenor saxophonist who has been living and performing in New York City since 1976. His beautiful tone and sophisticated harmonic conception have given him a unique creative voice which critics have described as "eloquent", "inventive", "thoughtfully lyrical" and "impassioned yet cerebral."

In 1977 he joined the big band of Thad Jones and Mel Lewis which at that time included Pepper Adams and Jerry Dodgion, and spent the next two years touring the U.S. and Europe. After Thad Jones left the band, Perry continued playing with Mel Lewis, recording three LP's with him. The band, with Perry still a key member, is now known as The Vanguard Jazz Orchestra, and continues to tour and record. Two of their recent cds have been nominated for Grammy awards.

Perry has performed with some of the most talented musicians in jazz. Currently, he is a member of the Rufus Reid Quintet, the George Mraz Quartet with Richie Beirach and Billy Hart, the Dave Scott Quintet, the John Fedchock New York Big Band and the Maria Schneider Orchestra. He has also played in several groups led by the pianist Fred Hersch.

Raised in the quiet Orange County suburb of Capistrano Beach, Leonard was exposed to the music at an early age, both by way of his father, a first rate musician and jazz pianist, and his mother, who had a passion for jazz and played bass as well. Leonard has studied both jazz and classical music since age 8, starting with his father, Rex, and continuing privately with others.

He started playing professionally in 1993, while attaining his degree in Geology from UC Santa Cruz. Since that time, Leonard has kept busy as a freelance sideman for instrumentalists and vocalists throughout the Bay Area. He has appeared at many area performance venues, including Yoshi's, Kuumbwa Jazz Center, The Jazz Store, Garden City, Jazz at Pearls, and The Monterey and San Jose jazz festivals.

Aside from gigs, Leonard is currently enjoying a renewed focus on writing original material.

Leonard was heard here previously with the Mitch Marcus Quintet, and most recently with the Charlie McCarthy Quartet.

Born in Washington D.C. on January 8, 1950, Barshay began cello lessons at age nine. During his year at the San Francisco Conservatory Peter was able to add one particularly impressive name to his resume. "I actually got to play under Igor Stravinksy," he explains. "It was for the official opening of Zellerbach Auditorium in 1968 and they commissioned Stravinsky to come here and conduct four concerts.” Peter has played Chez Hanny previously with the Michael O'Neill Quintet, and the Larry Schneider Quintet. Peter's Website Jason Lewis, drums. Jason graduated from the classical percussion program at San Jose State University, under the direction of Tony Cirone of the San Francisco Symphony, with a B.A. in music. Mr. Lewis has taught privately in the bay area, coached at the Stanford Jazz Workshop, and has performed clinics at schools throughout the San Jose area. He has played with a variety of talented musicians including; Joshua Breakstone, John Stowell, Gary Burton, James Moody, Mark Murphy, Norma Winstone, Larry Coryell, Darol Anger, Regina Carter, Johnny Frigo, Ann Dyer, James Carter, Taylor Eigsti, John Handy, Anton Schwartz, Mark Levine, Peter Apfelbaum, Cornelius Bumpus, and Kurt Elling. Mr. Lewis has also performed with the San Jose Symphony and the San Jose Civic Light Opera. Besides performing throughout the San Francisco Bay Area with many groups, often with bassist John Shifflett and pianist Paul Nagel, Mr. Lewis has toured and recorded with Michael Brook, Djivan Gasparyan, Ann Dyer, and Ashwin Batish. For much of the past two years he has been touring with Boz Scaggs, and appears on the latter's recording of standards, "But Beautiful". Jason was heard here previously with Dave Mac Nab Trio. Jason's Website