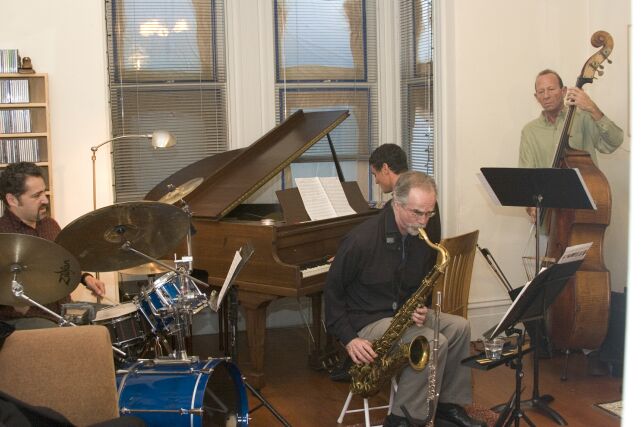 Charlie graduated from San Francisco State College where he was a member of the quintet which was named the best in the Intercollegiate Music Festival.

While serving in the Air Force Band in Germany he won a scholarship to Berklee school of music in Boston, where he studied composition and saxophone with Andy McGhee and Joe Viola.

Charlie did stints on the road with Grease, The Beach Boys and Van Morrison Before landing a gig with Lena Horne. "Working in a jazz quintet behind Lena was one of my best experiences," says Charlie.

Charlie teaches privately and as the Woodwind Professor at San Francisco City and Sonoma State Colleges.

Charlie has recorded a TV special for PBS as part of a jazz quintet with Rosemary Clooney, performed with the Louie Bellson Orchestra, Joe Lovano's Octet, James Moody, David Sanchez and with the Maria Schneider Orchestra at the SF Jazz Festival.

Look for Charlie on soon to be released CD's by guitarist Sebastien Lanson, bassist Walter Savage and Gary Flore's Caliente 2004.

Bassist Chris Amberger is a Berklee School of Music graduate.

He has toured and recorded with many of the greats in jazz including Tommy Dorsey, George Shearing, Rosemary Clooney, Red Garland, and Art Blakey.

Charlie and Chris played together in the Berklee School of Music recording band many years ago, and are looking forward to this reunion.

Raised in the quiet Orange County suburb of Capistrano Beach, Leonard was exposed to the music at an early age, both by way of his father, a first rate musician and jazz pianist, and his mother, who had a passion for jazz and played bass as well. Leonard has studied both jazz and classical music since age 8, starting with his father, Rex and continuing privately with others.

He started playing professionally in 1993, while attaining his degree in Geology from UC Santa Cruz. Since that time, Leonard has kept busy as a freelance sideman for instrumentalists and vocalists throughout the Bay Area. He has appeared at many area performance venues, including Yoshi's, Kuumbwa Jazz Center, The Jazz Store, Garden City, Jazz at Pearls, and The Monterey and San Jose jazz festivals.

Aside from gigs, Leonard is currently enjoying a renewed focus on writing original material.

Leonard was heard here previously with the Mitch Marcus Quintet.

Alan's work has been heard on jazz radio stations nationally and his original compositions have been recorded and released on the Blue Crescent and Polymorph record labels. His performances have been aired on B. E. T.'s Jazz Discovery Series and KRON TV's Daybreak.

Alan was heard previously at Chez Hanny with the Michael O'Neill Quintet.